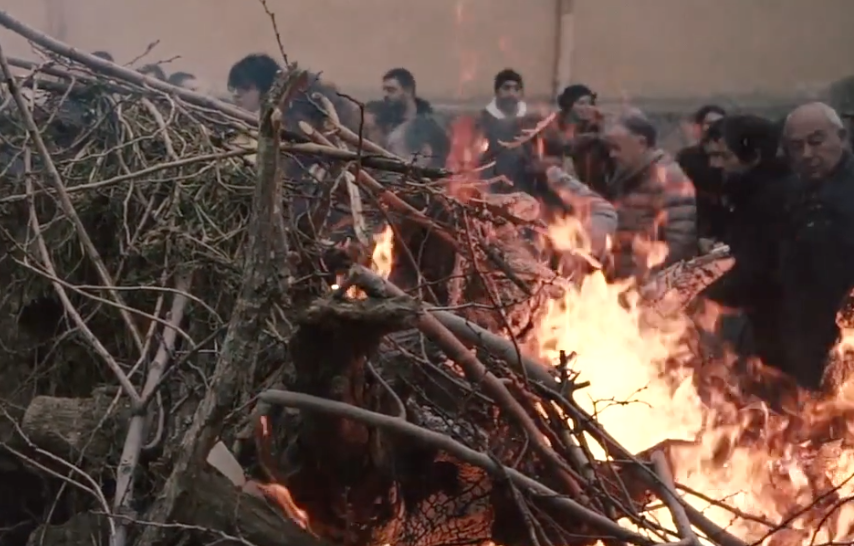 THE RITUAL GOES ON

This ancient ritual is lost in the mists of time and we preserve this tradition.

January 17, St. Anthony’s feast day, Mamoiada’s Patron, is an important day for the men of the village. Actually, it is the day of the first outing (sa prima issida).
After lunch, they wear the typical Sardinian clothes, namely: su billudu (velvet trousers), sa hamisa (button down shirt), su bonette (the hat), su muccadore (a cloth tissue used to coverthe head), and sos husinzos (shoes originally worn by the shepherds). They wait for the sunset, in an atmosphere of intense dedication.

The first group wears sa visera (the black mask), while the second wears shoulder sonajolos (a leather belt with cowbells) and sa soha (the rope). They then head to a place that will link all their fates: the place of the dressing. The first are the Mamuthones, followed by the Issohadores. The dressing phase starts. The men wearing velvet clothes take the black sheepskin and the cowbells: they arrange the six belts with the cowbells in order (from the biggest to the smallest), creating in that way sa carriga (literally the load, since it is heavy), that will then be put on the back. They wear the black sheepskin and the Issohadores will help them to wear properly the heavy carriga. They wear the black mask, the hat and they cover the head with the cloth tissue, tying it under the chin.
They are ready now…

The Mamuthones form two parallel equal lines. Some Issohadores are placed in front of the lines and others are behind. Except for one, su guidadore (the leader). He is placed in front of the Mamuthones, in the middle between the two lines: he decides the steps and when they have to go or to stop.
Su guidadore stretches his arms, verifying if the Mamuthones are ready, and they start.
They start to jump: the Issohadores take small steps, they untie the rope and they throw itinto the crowd, trying to catch women and girls, as a sign of good luck.
The Mamuthones focus their attention on the leader, doing what he orders.
The parade consists of ritual moves: they jump a intro (inward) and a fora (outward),moving forward with the ancient and unique steps. After a few steps, the leader puts his hand up: it is the signal. There are other four jumps: outward, inward, outward and inward. Afterthe four steps they perform sa doppia (double), which is to say three jumps in place. They take a very little break and then they start again with their ritual parade: a step inward and they go on, waiting for a new signal of the leader. This last one will be different: hand up and he spreads his arms as the ending signal, followed by the last jumps (outwards, inwards and sa doppia). This is how the parade finishes.
The ritual is finished.

The first group of the Cultural Association Atzeni-Beccoi was born in 1975, when Costantino
Atzeni (the man who is considered to be the ultimate Mamuthone) decided with some friends
to create “the Atzeni group” of Mamuthones and Issohadores.

After his death in 1979, the group was then dedicated to Peppino Beccoi, and in 1994 the
Folk Association was created.